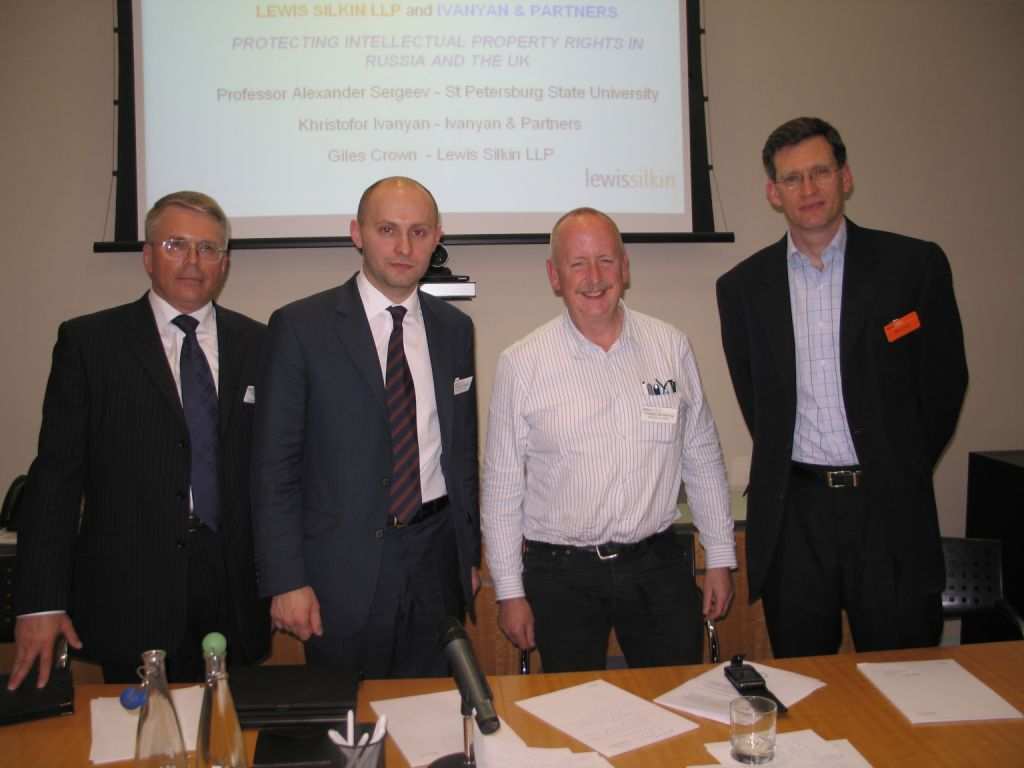 – How trademark protection in the UK differs

This seminar was organised in conjunction with our corporate members Lewis Silkin and Ivanyan & Partners who provided guest speakers and sponsored a post-seminar drinks reception. The seminar was held at the offices of Lewis Silkin and was chaired by Professor Bill Bowring, the Chairman of the BRLA.

The guest speakers were Professor Alexander Sergeev, the Head of Civil Law at the Law Faulty of St Petersburg University of Economics and Finance, Khristofor Ivanyan, Managing Partner of Ivanyan & Partners and Giles Crown, Partner and Head of Media, Brands and Technology atLewis Silkin.

With the introduction of Part IV of the Civil Code, Russia became the only country in the world where legislation on IP rights is fully codified. Until then, IP rights in Russia were regulated by various laws adopted in the 90-s (the Law on Copyrights and Neighboring Rights, Law on Trademarks, Patent Law and others). As from 1stJanuary 2008 all these laws were repealed and their contents were incorporated in Part IV of the Civil Code.

There were several attempts to codify the IP legislation in Russia and various commissions were created for this purpose. The first two drafts of Part IV of the Civil Code, including the one prepared by the commission headed by Prof. Sergeev, were rejected and the draft which was eventually promulgated into the law was criticized by many experts.

Professor Sergeev is a well known expert on intellectual property (â€œIPâ€) rights in Russia. He is the author of the leading law text book “The Law of the Intellectual Property in Russia” and a co-author and the editor of the recently published law text book “Civil Law” and the Commentary to the Russian Civil Code. Professor Sergeev chaired one of the commissions engaged in drafting Part IV of the Russian Civil Code which regulates the IP rights in Russia and which came into force on the 1st January 2008. His participation in the seminar therefore provided a unique opportunity to obtain an insight into the process of the codification of IP rights in Russia and to hear about the strengths and weaknesses of the newly codified legislation from someone personally involved in that process.

The Professor gave a critical review of the new legislation. In his opinion, it was a mistake to incorporate all legislation on IP rights in the Civil Code including regulations and rules of administrative nature, such as applications to the Patent Agency, etc. By its nature the Civil Code is a fundamental law and does not envisage frequent changes, whereas intellectual property legislation, particularly in relation to industrial property rights, is a flexible area of law which requires frequent legal updating. This and other problem areas of the new codified legislation were highlighted in the Professor’s presentation.

This analysis by Khristofor Ivanyan of the new law was followed by a presentation on its practical application in the sphere of trademarks, given. Khristofor outlined the changes in the process of registering trademarks and conducting due diligence before acquiring trademarks and identified practical problems that can arise in relation to these matters.

His presentation also included a review of disputes in relation to trademarks and problem areas in the dispute resolution. The courts in Russia are frequently faced with disputes relating to the violation of an exclusive right to use a trademark. Such violations are often penalized by the confiscation and destruction of counterfeit goods. The legality of “grey” (“parallel”) imports (when goods are imported into Russia by unauthorized resellers without the authority of the producer and an official dealer) has recently become a particularly topical issue. Very frequently the customs authorities regard such importation as a violation of the exclusive right to use a trademark and respond by confiscating and destroying the goods in question. Such an approach has been widely criticized by Russian lawyers. The decision of the Russian Supreme Commercial Court in the autumn of 2008 to refuse a claim by customs to confiscate and destroy a second-hand car imported into Russia without the authority of the car manufacturer was widely welcomed by the public and the legal community as a victory for common sense. Mr Ivanyan characterized this decision as a move in the right direction which will hopefully be followed by other courts in Russia as a precedent.

The presentations were followed by a question and answer session. The topics raised included: whether it is possible to pledge IP rights in Russia; how Russian courts protect IP rights; whether Russia’s application to the WTO has been affected by the gaps in IP rights protection in Russia; how the new Part IV of the Russian Civil Code compares to the legislation in other civil law countries.