Seminar & Drinks Reception
Organised in association with Addleshaw Goddard LLP
Guest speaker: Caroline Wilson, the Minister Counsellor (Economic and Trade & Investment) at the UK Embassy in Moscow who was in London in the preparation for the G20 Summit held in London on the 2nd April. 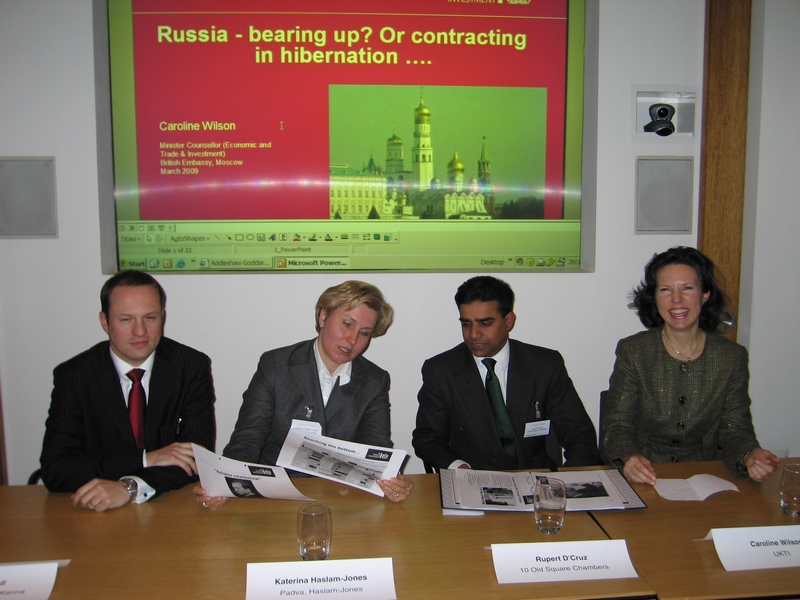 – how UK businesses in Russia have been affected by the financial crises;

– which business have been affected and how;

– the anti-crisis measures that have been implemented by the Russian government;

– the effect on UK businesses of (and their response to) these measures;

– the prognosis for the short, medium and long terms as they affect UK businesses. 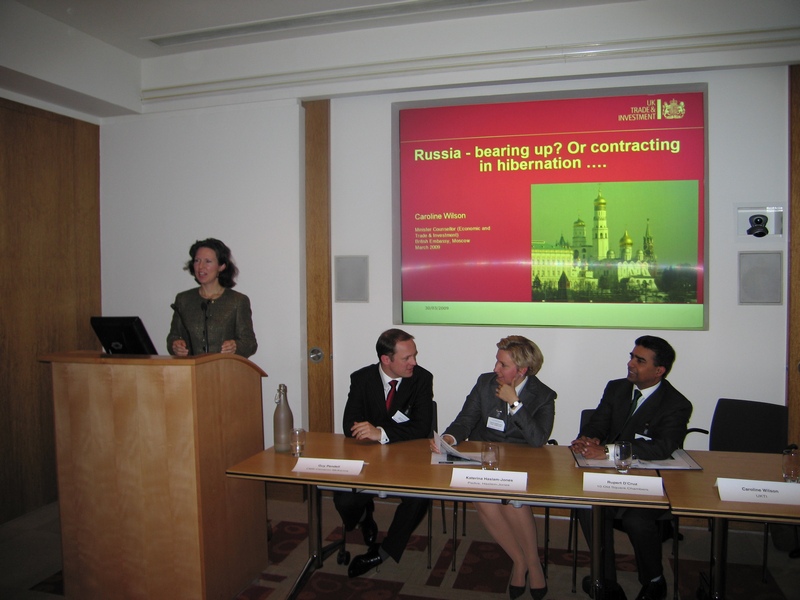 On 30th March we held a seminar on “THE INVESTMENT CLIMATE IN RUSSIA FOR UK BUSINESSES – Crisis or Opportunity?” in association with Addleshaw Goddard LLP, followed by a drinks reception sponsored by the firm.

The guest speaker was Caroline Wilson, the Minister Counsellor (Economic and Trade & Investment) at the UK Embassy in Moscow who was in London in the preparation for the G20 Summit held in London on the 2nd April.

Caroline gave an overview of the current economic climate in Russia in the light of the global recession and outlined how UK businesses in Russia have been affected. She identified the areas of business most affected, the anti-crisis measures implemented by the Russian government and the effect of those measured on UK businesses. Although in the short and medium term the Russian economy will continue to suffer badly the effect of the global financial crisis and decline in foreign investment, Carolineâ€™s prognosis for the long term investment opportunities in Russia was positive.

The presentation was followed by a panel discussion involving Katerina Haslam-Jones (Pavda, Haslam-Jones & Partners), Jon Tweedale (Addleshaw Goddard) and Guy Pendell (CMS Cameron McKenna) and Q&A session. The panel shared their views on the investment climate in Russia, difficulties faced by foreign investors and the prognosis for the future. A particular focus of discussion was their respective experiences of enforcing foreign judgments and awards in Russia, including:

Guy Pendell shared the results of a survey of Russian corporate finance activity prepared by his firm which revealed that whereas in 2007 M&A deals in Russia were concluded at a rate of almost one a day, with a combined value of c.80 billion Euros, in 2008 the number of deals was down a quarter and the value of those deals halved. However, the research also indicated that confidence was returning and the outlook for future corporate finance activity in Russia was positive.

Guy also highlighted recent changes in the Russian law on limited liability companies which now allows participants in a private company to enter into agreements regulating their rights, including the voting rights (a summary of these changes are included in the last section of this Newsletter).

The seminar was followed by a drinks reception.

The BRLA would like to express its gratitude and appreciation to Addleshaw Goddard for its help in organising the seminar and for its sponsorship of the drinks reception and to the panel members for their contributions. Particular thanks are due to the guest speaker Caroline Wilson, who was able to fit the presentation at the seminar into her very tight schedule.