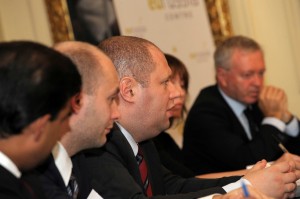 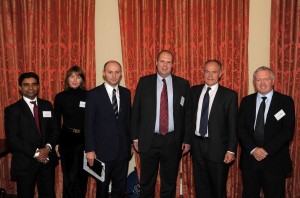 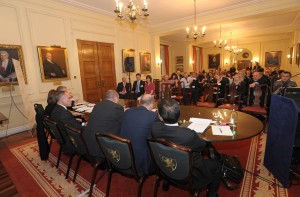 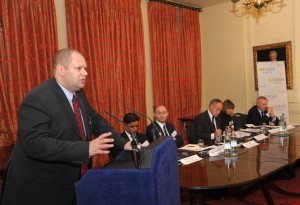 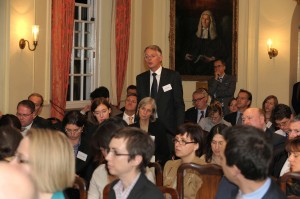 For our second “Rule of Law” seminar since the election of the President Medvedev we had a unique opportunity to hear from Yuri Lubimov, the Deputy Minister of Justice of the Russian Federation. The seminar was organized in association with the Bar Council International Committee and was held on 24th September 2009 in the impressive Large Pension Room in Gray’s Inn.

The seminar was chaired by James Dingemans QC, the Chairman of the Bar Council Committee who introduced and welcomed Mr Lubimov and a panel of experts who included Dr Alena Ledeneva, reader in Russian Politics and Society, School of Slavonic and East European Studies, University College London, Khristofor Ivanyan of Ivanyan & Partners, Fraser Cameron, Director of EU-Russia Center and Rupert D’Cruz, Secretary of the BRLA and Bar Council International Committee Representative for Russia.

In his presentation Deputy Minister Lubimov outlined the areas of his responsibility at the Ministry of Justice and the priorities currently on the agenda of the Ministry of Justice for creating a society based on the rule of law. One of the problems highlighted by Mr Lubinov was the need for codification of the numerous (over 300,000) laws and by-laws created over the years in a changing economic and political environment and at federal and regional levels. As examples of progress that had been made, Mr Lubimov mentioned the codification of civil law which was finalized last year with the final part (Part IV) of the Russian Civil Code (the subject of the BRLA’s Intellectual Property Seminar held in April 2009, referred to above) and the introduction of the Tax Code.

Mr Lubimov stated that the top priority of his Ministry is to make the law well known to the public. He mentioned that there is already in place a state program for “legal enlightment of the population”. This objective involves: (1) making the law more accessible to people and the provision of free legal aid by the state system and by the Bar, notaries, law society, legal clinics at universities, etc. and (2) making the law more transparent for people. An example is the website of the High Commercial Court of the Russian Federation which lists information of all ongoing cases and which allows the public to view court decisions as soon as they are made.

The stability and predictability of the law was another priority identified Mr Lubimov. As an example of progress in this direction Mr Lubimov named the Law On Foreign Investment in Strategic Industries which created for the first tims a clear approval procedure for investments by foreign entities in specific industries replacing a situation when it was not clear who was to make a decision in each case. (This law was the subject of a BRLA seminar in November 2008, held in conjunction with Baker & McKenzie for details see our Spring Newsletter and the web site).

Mr Lubimov informed the audience that a further priority of the Ministry of Justice is an anti-corruption review of all past acts of the various ministries. There is already a procedure in place to assess if a normative act is corrupt and about 80% of all normative acts are subject to review and assessment.

Another objective is the transfer of some state functions to non-government bodies. A good example is the notary where the state function was quasi-privatised. This led to the “revival” of the profession and its increased popularity.

An important factor of the Rule of Law, according to Mr Lubimov, is effective sanction. The bailiffs agency in Russia has become more active and a new mechanism for effective execution of court decisions has been introduced which includes a database of debtors at the frontier agency which enables debtors to be prevented from leaving the country (as well as other sanctions, including the deprivation of fishing, hunting and other licences).

Mr Lubimov concluded his presentation by emphasising that the Rule of Law is a top priority for President Medvedev. His presentation was followed by contributions and discussion on the subject by members of the Panel of Experts and questions to them and the speaker from the audience.

The proposed radical reform of the Bar mentioned by Mr Lubimov in his presentation (and, apparently, being one of the reasons for his visit to London) generated lots of interest from the audience. According to Mr Lubimov, only 6-8% of the Russian legal market is represented by members of the Bar (“advocates”) with the other 82% of legal services being provided by companies, auditors, amateur helpers (“lawyers by heart”). Whereas only advocates have the right of audience in criminal cases, this does not apply to commercial cases, family law matters, etc. Therefore, according to Mr Lubimov, there is a need for the legal market and advocates profession to be united. He identified two directions of the proposed reform of the Bar as: (1) to control the integrity of the legal market, and (2) to create an elite community of qualified lawyers, similar to the UK model.

Would and how the proposed reform affect the regulation of foreign lawyers practising in Moscow? – was another question posed to Mr Lubimov. He explained that at the moment his Ministry is at a stage of understanding the problems of the Bar and is not yet ready to make any decisions. Therefore it was difficult at this stage to answer that question in relation to the regulation of international law firms in Russia. However, Mr Lubimov emphasised that the objective is to create equal conditions for all participants of the legal market.

The seminar was followed by a drinks reception where the participants were able to continue with their questions to Mr Lubimov in an informal setting.

or view it online – www.thelawyer.com/past-imperfect/1002608.article